Thank you to all veterans for your service to our country.  But a special show of appreciation to those who have performed double-duty. 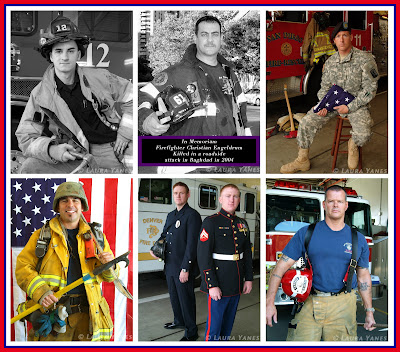 The fire service is fortunate to have so many brave men and women who serve their communities and their nation by wearing two uniforms.  I am proud to have met so many including these men from New York, Colorado and California.


FDNY firefighter, Christian Engeldrum (top center) volunteered after 9/11 and sadly, was killed in a roadside attack in Baghdad.  He has often been called the 344th firefighter to die because of 9/11.


Jens Pietrzyk (top left), served as a paramedic and was awarded a Bronze Star for outstanding service and named one of two "Best Medics in the Army."  If you're in Littleton, Colorado and call 9-1-1, you might get to see Jens do what he does so well.


There are so many others, too many to mention here.  One day is not enough to show our gratitude.


Thank you to America's veterans. 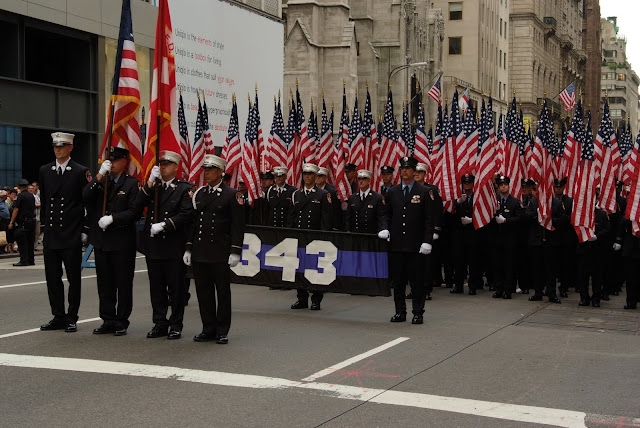 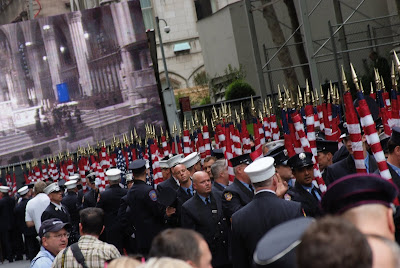 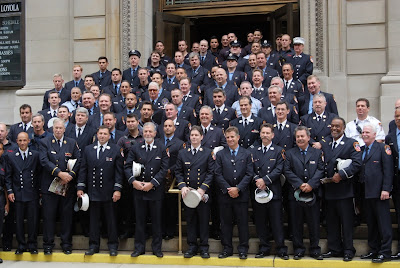 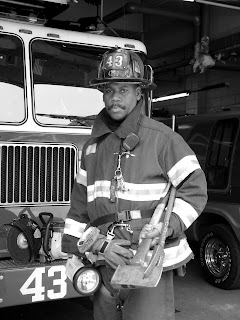 But Andre Cox stands out for me.  He saw me and said, "You're Laura the photographer!"  Seems he's retired from the job and did so without any photographs except the ones I took of him.  But he didn't know how to get in touch with me.  I can't describe the sheer joy and happiness in his face when I approached him with my camera.  Especially since it was right after another firefighter saw his photo on my iphone and showed it to his wife.  She'd  never seen it and immediately asked if there were more photos available.  She added that he was forced to retire and is having trouble coping.  The photos mean just that much more to them now.
I'm so glad to be "home" for this.  It's been a great homecoming, filled with love and affection from FDNY.   Every minute is uncomplicated and pure.  Even a trip to ostco yesterday was an encounter with a Harlem crew I photographed years ago who invited me to their 9/11 reception.
Standing on 5th Avenue and applauding FDNY came naturally for me and all the other people with whom I stood shoulder to shoulder.
We are united.  We will never forget.
©2011 Laura Yanes No comments:

Two years ago today, members of FDNY's Marine 1 - the Manhattan based fire boat - performed an amazing rescue on the Hudson River.  US Airways Flight 1549 made an emergency landing on the river with 155 people on board.  The New York Times ran a story about it today that's worth reading.  The article describes the valiant and quick actions of Tom Sullivan, Tom Piambino and other members of Marine 1.  I remember watching the news coverage on that day and thinking how gustsy those guys are and how proud I am to know them.

During the time I photographed members of FDNY, I heard many stories about 9/11.  One had a powerful impact on me.


While working at a station in lower Manhattan, one firefighter described how someone from a marine unit saved his life on 9/11.  Benny was studying to become a driver of a fire truck.  Most departments call the driver the “engineer,” a term that comes from the days when a firefighter operated the steam engines that pumped water for the hoses.  The term “chauffeur” is more commonly used in New York City.
On the morning of September 11, Benny was attending chauffeur school when the call came in for all personnel to report to their stations.  His station is not far from the World Trade Center.  He and his family also live in the neighborhood.
After grabbing all the flashlights, batteries and other gear he could, Benny rushed to the site.  There he saw his best friend and the two agreed to enter the building together.  Just then, Benny’s commanding officer called him over.  Benny asked his friend to wait for him.  His friend said he would only wait a couple of minutes then was heading into the building with or without Benny.  The officer had a special assignment for Benny.  He looked over at his friend and watched him race into the building fully loaded with his gear.
His officer asked Benny to assemble  a team and begin removing bodies.  But when the building began to fall dust and debris flew in all directions making visual sighting impossible.  Benny didn’t know what direction to go.  Forward?  Left?  In reverse?
Benny grabbed his handy-talkie radio and called out an S.O.S.  “Help!” he shouted.  “We’re lost.  Which way is safe?”
Suddenly, a voice from one of the marine units responded, “Listen for the fog horn.  That’s the river.  Follow the sound.”  The firefighter began producing the loud, deep blare repeatedly.
Benny and his team followed that beautiful noise and made it to safety.  When I asked him if he knew who it was on the other end of the walkie-talkie, Benny said he didn’t.  Sadly, Benny never saw his friend again.
I thought about Benny’s story when other facts and details about the boats began emerging.  With no fire hydrants at Ground Zero, it was up to the fire boats to pump water from the river to the guys on land trying to put out the flames.  Without subways, trains or taxis and cars, the boats helped carry stranded people across the Hudson River to New Jersey.
A few months later, I was delivering photos to a station near the United Nations.  As I entered, there was a man dressed in civilian clothes leaning comfortably against the watch desk near the front door.  He was chatting with the crew on duty.  Everyone passed the photos around making the requisite jokes about the various men in the portraits.
The man in the street clothes, Neil King, smiled at me and asked, “When are you coming to my station?”
“Where's your station?” I asked, still struggling with transportation issues.  Getting to Brooklyn or Staten Island was not easy.
“I’m on the fire boat,” he said, matter-of-factly.  I fought back the tears and moved quickly to Neil and extended my hand to shake his.  I told him the story Benny had shared with me.  I offered to schedule a photo session as soon as possible.
Neil invited me to join him and his crew on Marine 1 for lunch.  The boat is docked behind the sanitation station on the West Side of Manhattan near the Meat Packing District.  It sits at the end of a pier next to the dock originally constructed for the Titanic to anchor after its maiden voyage across the Atlantic.
Over the next year, I was invited out to Marine 6 in Brooklyn and Marine 9 in Staten Island.  I told the story of the fog horn but never learned the identity of the quick-thinking firefighter who became a beacon in the darkness for Benny and his team.


Tom, Neil and the other guys on the boat gave me a baseball cap and t-shirt with their logo on it.  I wore the cap always and played a lot of golf in Palm Springs with it on.  So much that I wore it out.  On a trip to New York, Marine 1 was one of the stations I went to visit.  I took the hat with me.


One of the guys told me I couldn't represent them that way and gave me a fresh new cap.  I played golf today - the first time in a long time.  In their honor, I wore my Marine 1 baseball cap.  It was one of the best games I've played.