Shortly after I took this photo in September, 2004, Chris Dunic’s mother called me. Her son, she said, was being deployed to Iraq. A member of FDNY’s Squad 288 in Queens, Chris was part of the elite unit’s team that rushed to the pile in a futile attempt to find survivors. Squad 288 shares a fire house with Hazmat 1. Together, they lost 14 of their members on 9/11. The search, rescue and recovery effort was a grim job, but one that had to be done, and Chris was well trained to do it. Of course, he was only one of many ready and willing to get the job done.

Linda Dunic wanted me to know how much the photo meant to her, especially now that he would be so far away and in harms way. She and her husband, Slavko, own a very popular restaurant in Manhattan, Campanile. She planned to proudly display the framed portrait at the entrance to the restaurant for all to see.
"I want everyone who comes in to see my son," she told me. "I'm so proud of him." Her voice quivered on the edge of tears.

We never met, but we exchanged a few emails. Then time slipped away. I left New York a few months later to visit other fire departments. 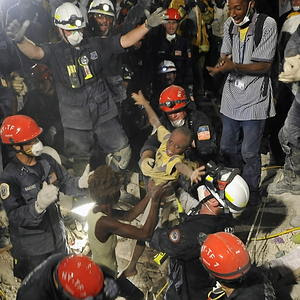 But a recent article in the New York Post about the rescue of a young boy made famous by a photo of him rising out of the rubble, arms spread wide, embracing life, caught my attention. It described the work by members of the New York Task Force who rushed to Haiti after the devastating earthquake in January. While all the highly trained police officers and firefighters joined in the search and rescue efforts, one name leaped off the page for me.
Looking deeper into the story, I read the London Times article which stated:
“The final, magnificent breakthrough fell to Chris Dunic, a veteran New York fireman whose tunnelling skills were forged in the smouldering ruins of the World Trade Center on September 11, 2001.”
I got chills. I also got back in touch with Linda Dunic to tell her how proud I knew she must be - indeed, how proud we all are. But proud is not the word to describe what Linda felt. Like many of us who saw the rescue on television or saw the now famous photograph of 7 year old Kiki in newspapers, magazines and on-line, Linda saw it too. While watching the evening news with the rest of America, Linda said she was moved to tears at the amazing sight of that young boy and his life-affirming smile and joyous response to recovery.
But she didn’t see her son in the pictures. As soon as Chris lifted the boy out, he went back down for the sister. The tv cameras didn’t catch that. 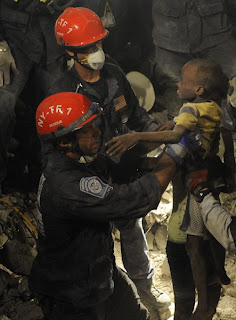 And Chris, a humble man, didn’t tell his mother about the crucial role he played in this miraculous recovery. He would occasionally reassure her in phone calls and emails that he was safe and well, but never mentioned Kiki. It wasn’t until he got back to New York and, together with his mother, was watching another news report about the rescue that he finally told her, “That was me.” It must have overwhelmed her.
I can't imagine how it must have felt for Chris and the other rescuers to make such a successful recovery - especially since so few such successes were possible following the terrorist attack on September 11.
By now the story has been told in newspapers and magazines - most recently Reader’s Digest. But no story can capture the emotional pride and joy of a mother who has instilled in her son the integrity, humility and bravery that inspires him to commit his life to protecting other’s whether it’s Ground Zero in New York, Afghanistan and Iraq, or the devastated streets of Port-au-Prince. Without a doubt, he will be called upon again and he will answer the call without hesitation. It's who he is. It's who she raised him to be.
Maybe it will take a photo to express her pride - worth a thousand words, right? It’s certainly a mother and son photo I hope to take one day. I will be honored if it too takes it’s place on the wall at the entrance of Campanile along with the new photos - seen here - that she’s added from Chris’ extraordinary days in Haiti.
Haiti photo credits: Matthew McDermott, January 2010
©2011 Laura Yanes

Love it. It made me think what a wonderful idea you had to include a parent(s) in the photos. Keep up the great work Laura.

Laura, I am very fortunate to know Linda and Chris Dunic, as my wife babysat for him for many many years. When I was in the Air Force his mother asked me to take him to an Air Force recruiter, well long story short he said "he wanted to be on the ground where all the action was" -- he was joining the Army.

This man is a major American Hero that no one knows. He not only has done the wonderful things you speak of, but he also fought in Irag, Afganhastian and was in Haiti Ten years ago when they had a revolt. This man was on the battle field at Ground Zero, The battlefields of the most important wars in the past 10 years and was there at the battle against mother nature to save lives.

I have written a movie about my life growing up in Brooklyn and now it's time for a movie or national recogniation for a True Hero!