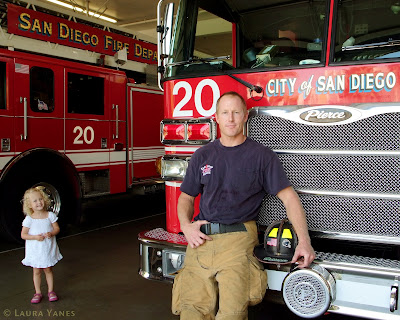 Eric Matteson asked how long he had for his wife and daughter to join him for a photo before I left the station.  I told him it didn't matter, I'd wait for them.   It was a busy day and I could tell I'd be at Station 20 near the San Diego Sports Arena as long as the sun held out.
I finally got a couple of minutes to gobble down some  lunch while Eric and his crew responded to a call.  I ran across the street to a Mexican restaurant and returned to the station with take-out.
While I was eating, Eric's wife, Rachel, and his daughter, Izzy, arrived to be photographed with him and came over to introduce themselves.
It's hard to talk with a mouth full of taco.  So when she asked me a question, I put my hand up to pause while I chewed and swallowed.  Rachel, an elementary school teacher, saw this as a teachable moment.  "She has good table manners," Rachel told her daughter, Izzy.  "She doesn't talk with her mouth full."
Rachel explained that Izzy doesn't like to have her picture taken and warned me that she might be difficult and resist.  I learned later from her father, Eric, that it was even hard to get Izzy to go to the station when they told her it was for a photo.
Stalling for time while I finished my lunch, I invited them to look through my portfolio of photos of firefighters from across the country.  Izzy raised herself over the edge of the desk where I was eating.  Her legs dangled off the side.   Aggressively, she flipped through page after page and boldly explained, "I'm looking for a picture of my daddy."
I told her that I was waiting for her father to return to the station so I could take his photo.  It prompted her to ask, "Then will you put my daddy in here?"  She repeated the question over and over as her mother and I tried to talk between bites of lunch.
"We're having a conversation," her mother said.  "Please don't interrupt."
Izzy waited.  As soon as Rachel and I finished, Izzy asked again, "Will you put my daddy in here?"
So I bargained with her.  I'd take her daddy's picture and put it in the portfolio if she would take one with him.  She agreed.
When the engine returned, we went right to work.  We took several photos of Eric and his daughter, with Rachel and Izzy.
I got a kick out of it when we took a family portrait and she kept asking, "Can I get my guys in it?"  She earnestly positioned her stuffed animals on the bumper of the engine, including a "firefighter."  Clearly, she's the child of a firefighter who wanted to make sure she took care of her "guys."
Next, it was time to work on some solo portraits of Eric.  As I was setting up a shot with him, Izzy wandered into the frame.   Eric didn't know she was there.  He was looking at the camera expecting me to click at any moment.  Rachel saw her and started to reach for Izzy.  Instinctively, I put my hand up - once again - to halt Rachel and quickly grabbed the photo above.
Almost immediately Engine 20 got another call that brought my session with Eric to a halt.   So, used the time to return to my computer to download the photos and get them off my camera.  Izzy followed me and started looking through the portfolio again.  "Did you put my daddy in here?" she asked again.  She is a very determined child but I'm not that fast.
When Eric returned to the station, I asked him to fill out a photo release for my files.  Izzy jumped up on the desk, grabbed a release and a pen then began to fill one out, too.  I'll keep it in the files with her father's.

Afterwards, some of the firefighters and I were looking through the photos on my computer and couldn't stop smiling at the photo of Izzy and Eric.  There was a long silence as everyone just stared at it.
Then someone said, "Imagine what Izzy's children will think of this photo when they see it."
Suddenly, the project came into clear focus for everyone in the group.  They got it!  These photos are for the families of firefighters to treasure for generations to come.
Izzy makes the photo.  The smile on her face says it all.  Like so many family members, they are proud of their firefighter.
Izzy and her father are now prominently featured in my portfolio.  I tried to arrange for her to see it before I left San Diego but the flu prevented her and her family from meeting me.  I will stay in contact with them and make sure she knows we are all proud of her father and grateful to her and her mother for giving him the support and confidence he needs to do the job he loves.


Another teachable moment . . .  she can trust some people to keep their word.
©2011 Laura Yanes